For the Fall Sprints, the last CenDiv Regional race of the season, Chicago Region decided to spice things up a bit. Instead of a single race spread out over two days, or 2 races (one race each day), they put together a 4-race schedule. The first three races would be 8-lap sprint races, with each race setting the grid for the following race. The last race would be an 18-lap "feature" race. The feature race would be the only one that counted towards the Regional championship, but each of the four races would count towards a "weekend" championship.
I was looking forward to the quick sprint races, but not to the weather. Friday (towing day) was cold and rainy all day, and the forecast for the weekend called for highs in the 40s and overnight lows below freezing. I pulled out the long underwear, gloves, and winter coats. 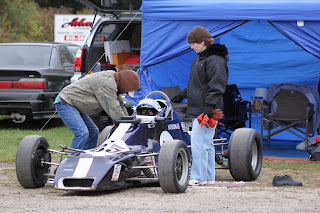 When we got to Blackhawk Farms Raceway Saturday morning, a layer of frost covered everything (sound familiar?) and the track was a little wet, but the sun was peeking out from behind the clouds. The morning qualifying session was difficult because the cold weather made for some great horsepower, but it also took away a lot of traction. On top of that, the track was wet in several spots, including the front straight. Any heat that built up in the tires would be rinsed away before corner 1, which made braking dicey. I got a little spooked after locking the brakes a few times. That plagued me for the rest of the weekend, and I braked too early every lap. Still, the lap times were promising for such challenging conditions. 1:31, 1:27, 1:28, 1:26... then a 1:24.6 on the last lap! That last lap was good enough to catapult me to the CFF pole. (Mike Green had tried using tire warmers before the session. He warmed the tires up to 170 degrees before going out. When he came back, the tires were all at 80 degrees.)
Sprint 1 Grid (top 10):
FF 22 John Spinello 1:21.6
FF 38 Dan Johnson 1:22.1
FF 10 Steve Barkley 1:23.8
CFF 65 John Haydon 1:24.6
CFF 7 Mike Green 1:25.3
FV 88 Hal Adkins
FV 19 Matt King
FF 49 John Luxon
FV 70 Daniel Eick
CFF 15 Bruce Drenth
When the green flag came out for Sprint 1, I got a jump on Mike and took a defensive line into corner 1. He tucked in behind me, but somehow I carried more speed and managed to open up a comfortable gap before corner 3. When I stopped watching my mirrors, I realized that I was close enough to the three lead FFs that I was in a good position to challenge Spinello for 3rd overall! Just as I was trying to talk myself into settling for 4th overall and the class win, Spinello dropped out. A lap later, William Cobb in a F500 passed me for 3rd overall. I would have liked to finish higher overall, but as my dad said later, "You won your class, and you can't get any firster than first!"
Many of us (including me) had assumed that the finishing order from each sprint would set the grid for the next race. We were a little surprised to learn that the grid would actually be set by fast lap time during the race, not by finishing position. Clever -- but it cost me a grid spot! While I settled in and cruised to the finish, Mike had actually turned a faster lap trying to chase me down. Touche'.
Sprint 2 Grid (top 7):
F500 28 Cobb 1:17.9*
FF 38 Johnson 1:18.6
FF 10 Barkley 1:18.9
FF 22 Spinello 1:21.5
CFF 7 Green 1:22.3
CFF 65 John Haydon 1:22.5
FF 49 Luxon 1:22.8
*Cobb did not go out for the morning qualifying session. He started Sprint 1 at the back of the grid and worked his way up to 3rd overall, setting fast lap of the race in the process.
When I saw the results from Sprint 1 and the grid for Sprint 2, it struck me how well I was 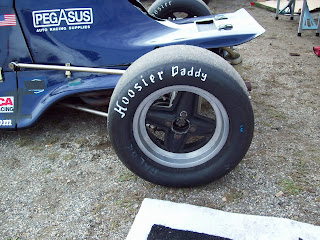 keeping up with the FFs. These cars usually run soft-compound tires, which offer better traction than the hard spec tires that CFFs run. Then it dawned on me: The FFs couldn't get an advantage because the cold weather prevented their tires from getting warm enough to be effective. (Cold? It snowed during the lunch break!) The CFF hard tires, on the other hand, never get very sticky, so their behavior in the cold is about the same as it is on a hot day. Another thing working to my advantage is the fact that I have spent the majority of my racing career on old, used tires which have very little stickiness left. For the first several years, I actually raced on street tires. I'm not used to relying on sticky tires.
Before Sprint 2 started, Dan Johnson told me that he had one shock absorber that had failed. I was a little surprised that he decided not to run in Sprint 2 (he had set the fastest FF time with the failed shock, after all) and at least set a time so he wouldn't have to chase from the back in Sprint 3. But he decided to try to locate a replacement shock, probably because he would only have to set a good lap time in Sprint 3 (not finish well) to grid well for the feature.
When Dan didn't show to the grid, that put me one row behind Mike. He got a good jump on me and led me for the first 3 laps. I stayed on his tail to try to find an advantage. Finally I got a good run coming out of corner 6 and managed to get in front of him before corner 7. I wasn't able to catch the leaders this time, but I got down to a 1:21.5 and once again settled in for a 4th overall finish and another class win.
Sprint 3 Grid (top 8):
F500 28 Cobb 1:16.9
FF 22 Spinello 1:18.6
FF 10 Barkley 1: 19.0
FF 49 Luxon 1:20.4
CFF 65 John Haydon 1:21.5
FV 81 Bertolucci 1:22.1
CFF 7 Green 1:22.5*
CFF 15 Drenth 1:22.5*
*Green's and Drenth's fast lap times matched to 0.001 second. They were actually gridded by their second-fastest lap times, which differed by 0.041 seconds.
Sunday morning dawned just as cold and frosty as Saturday. It was so cold, the Stewards decided that we should have two pace laps for each race, so we could have more of a chance to warm up engines and tires. That was a good decision, in my opinion. I even came up with a plan: The first lap would be spent warming the engine and tires; the second lap would be just for warming the left front tire and the brakes -- in anticipation of the right-hand corner 1.
When we gridded for Sprint 3, we were surprised to watch Cobb take the pole position and then drive back to his paddock spot. I'm not sure what happened there, but I'm assuming the cold was making his car misbehave. Which is odd, considering that F500s have snowmobile engines. That meant that the fastest car in the group would start the feature race at the back. Meanwhile, Johnson had found a new shock and was ready to start Sprint 3 from the back.
Once again the race start worked out in my favor. I accelerated away, but Green got balked by another car going into corner 1. That let me open up a comfortable lead on Green before the end of the first lap. Meanwhile, Johnson had made his way through the pack. He passed me in corner 1 on the second lap and passed Spinello soon after. He challenged Barkley for the overall lead, pulling out to pass in several corners, but he wasn't confident that he could make the pass, so he backed out and pulled back in line at the last moment. That dicing was slowing Barkley down enough that I caught up to the lead pack within a couple of laps, and three laps in a row I watched Johnson try to pass in corner 7, only to back out and concede the corner. Finally, he decided that he would make the pass, even if it meant forcing Barkley to back out. He pulled out to pass Barkley going into corner 7 again and tried to outbrake him. Unfortunately, he miscalculated and the car began a slow spin onto the grass on the inside of the corner. Spinello and I both saw this and backed off to let things unfold before we got to the corner. Johnson slid sideways through the grass, hit the curbing at the inside edge of the track... and his car barrel-rolled onto the track, sliding upside-down across the corner exit. Barkley came to a full stop to avoid him, but Spinello and I were both able to sneak around the mess, passing Barkley in the process.
Actually, I didn't quite make it. Barkley got going again just as I was next to him. He looked over and recognized that I wasn't in his class, so he was ready to let me go. Then he realized that Spinello was also in front of him, so he put his foot down to try to get the lead back. Unfortunately for him, this was the last lap and he didn't have enough time left to chase him down. I finished 3rd overall and got another class win.
Feature Race Grid (top 6):
FF 22 Spinello 1:23.1
FF 38 Johnson 1:23.5
CFF 65 John Haydon 1:23.8
FF 10 Barkley 1:23.8
CFF 7 Green 1:24.7
FF 49 Luxon 1:25.6 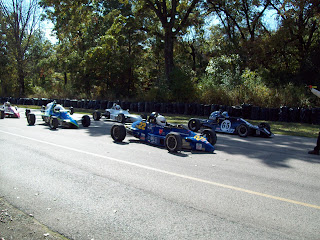 With Johnson out, that put me on the front row. We went out for the pace lap(s) and we all proceeded to toss the cars back and forth, trying to scrub some heat into the tread. Back and forth, back and forth... but as we exited corner 5, I realized just how tired I was. My arms were completely exhausted! I didn't know how I could make it through a second pace lap, much less 18 race laps.
Thank goodness for adrenaline. The green flag flew and Spinello and I dashed for corner 1. Luxon and Cobb both passed Green on the first lap, giving me a bit of a gap. Barkley passed me somewhere in the first lap as well, but I still had the CFF lead. About halfway through the race I caught up to a Formula Vee and lapped him just before corner 7. Once I was past him (and just before Green and Luxon had passed him), he spun. That opened up my lead a little, and I was able to relax a bit. I tried to be conservative, telling myself that steady 1:21s should keep me in front. When I looked at my lap timer several minutes later, I saw that I had done a 1:20.9. Then a 1:19.9. 1:19.8. Finally, I got down to a 1:19.007 -- just 0.3 seconds slower than my best time ever. I finished 4th overall, with another class win.
Winning my class in each of the four races secured the "Weekend Championship", which was an excellent way to finish off another Regional Championship in CFF.
So that's 2 Midwestern Council championships and 2 Regional Championships. Can I count the Weekend Championship as a 5th?
Posted by John Haydon at 1:53 PM