Driver of the Year

Last Saturday was the annual Midwestern Council of Sports Car Clubs awards banquet. We gather each year to honor the champions in each class and to present several special awards to members who have excelled in areas that aren’t scored. Sportsman of the Year is one of those awards, given to the competitor who is voted by the other members to have driven hard but always clean, helping others along the way, demonstrating the spirit of fair play, respecting others, and behaving well even in the face of defeat. Driver of the Year is awarded to the driver who has not only finished well in his class, but has also shown excellence in his driving skill (sort of a “champion of champions” award).

I was voted the Sportsman of the Year in 2004, primarily because of a long story involving an engine that I was told was legal, and a fantastic season (including a lap record) that I voluntarily forfeited when I found out that the engine I had been using wasn’t legal. I was glad that people appreciated my honesty, but I couldn’t help wishing that I could have been remembered for something other than that embarrassing episode.

This year, I was nominated again for Sportsman of the Year and also for Driver of the Year. The Sportsman nomination was partially because I helped to honor Frank Nelson, a Formula Vee driver who had passed away over the winter. He had asked to be buried in his racecar, but his family found that the cost was prohibitive. They mentioned that the next best might be to scatter his ashes around the racetrack from his racecar, and I jumped at the chance to be involved. I got his car ready to go, and I gave him his final ride just before the start of the first FV race of the season.

Lynn Serra won the Sportsman of the Year award, which I still enjoyed, since I was one of several people who nominated her. Lynn works on the Safety & Rescue team whenever she isn’t racing her Formula Ford. She frequently solicits help for other drivers who are in a pinch, but I honestly don’t remember her ever asking anyone to help her. I was thrilled to be voted the 2005 Driver of the Year. Even when I do well on the track, I sometimes find myself making excuses for my success (the other cars weren’t running very well, only three cars showed up, Pete must have had an off day), so it was a very pleasant surprise to have my peers give me such a vote of confidence.

I was also presented with a lovely plaque for the Club Formula Ford championship, but the real highlight of my evening was getting the Bartelt Belt.

Let’s back up a little. Despite what they show in movies (Le Mans and Driven being prime examples), racers are generally not a serious, dry, scowling bunch. Racing is a serious enough activity. We like to keep things in perspective by not taking anything else too seriously, even if it means poking fun at ourselves and what we do.

Jack Bartelt reminds us of the humorous side of racing better than anyone else I’ve met. When I first saw Jack race, I noticed that while all the other drivers would wave to the corner workers on their cool-down laps, Jack would instead shake a rubber chicken at them as he drove past. Jack decided to inject some humor into the Club Formula Ford championship while adding a little to the prestige and lure of the class at the same time.

In 1993, Jack made the Bartelt Belt, a pro wrestling-style championship belt with the names of all the past CFF champions on it. Every year since 1993, it has been presented to the CFF champion by “Action Jackson,” Jack’s WWF alter ego. The first Midwestern Council awards banquet I attended was for the 1993 season, and the hilarious presentation stuck with me. Ever since that night, I thought about how much fun it might be to be presented with the Belt. I confess that part of the reason I bought the Tiga was that I wanted a chance at the Belt.

Unfortunately, the people who organize the banquet have all gotten too old to see the humor and value in the belt presentation, so Jack was not given the stage or the microphone. We had to settle for an unofficial mini-presentation in one corner of the banquet hall after the official program was over. Several past CFF champions 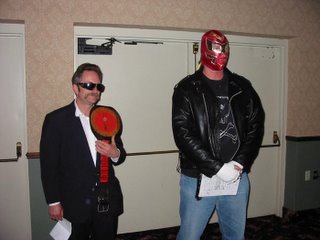 gathered to pass the belt to me in front of a small crowd of people who still appreciate lowbrow humor. 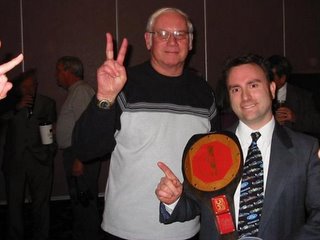 
The 2006 racing schedule is changing already. The June 24 Formula 1 support race has been officially cancelled. The National races at Nelson Ledges (July 29-30 and September 2-3) and Mid-Ohio (June 3-4) are sounding less appealing right now. Those tracks are a pretty long tow, and I’m not likely to gain enough points at those races to make the trip worthwhile. I may replace those races with some Midwestern Council events instead. And if I don’t get enough points early in the season to make the Runoffs, I may just finish the season running MC and SCCA Regional races.
Posted by John Haydon at 11:41 AM No comments: