July 12-13 was a double Regional race at Blackhawk known as the "Firecracker". Saturday morning was very damp from soaking rains overnight (which created a fun little moat in my paddock space), but most of us went out on dry tires for the first session. I still don't know why any of us thought that was a good idea. None of us turned a respectable lap time in that session, and a few of us came perilously close to writing off our cars completely. Yes, my hand is raised.

The track was dry for the afternoon qualifying session, so all of us dropped our times dramatically. I qualified toward the back of the pack, but I'll need to check my excuse file to tell you why. Here we go: I was having an off weekend, the weather was hot, the sun was in my eyes, and the goldfish ate my homework. I certainly can't blame the car. It was begging to go faster. 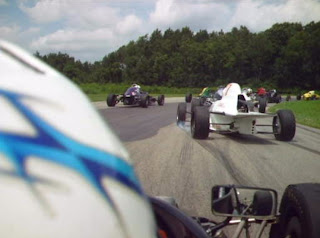 During Saturday's race I tried to keep up with Pete Wood while he tried to pressure Bob Hall into making a mistake. Neither of us succeeded. Pete was in much better shape than I was, so it was all I could do to keep him in sight while the leaders drove off into the distance. For some reason, Pete slowed down towards the end of the race. That only made me drive faster (and beat my qualifying time by 2 seconds), but I still couldn't catch him until just after the finish line.

Pete had somewhere else to be on Sunday, so I had to find another rabbit to chase that day. Fortunately, Tom Stillwell fit the bill very well. I chased his white Swift for several laps, and he helped me to come within a half second of my fast time from Saturday. I had a lot of fun that session. I always think it's a lot more fun to chase a quick car than to just run laps alone, even if the car you’re chasing is too aerodynamic to give you much of a tow.

I got a fairly good start in the race, and on the second lap I was right on Bob Hall's gearbox through corner 5. Unfortunately, his off-track excursions during qualifying had damaged the fasteners on the nose cone of his car, and the nose actually came off as we exited corner 6. It was an amazing sight. The nose seemed to dance in the air, climbing and tumbling high enough and long enough that three of us drove under it before it came back down. The trouble was, I was completely mesmerized by it. By the time I finally peeled my eyes off of it, Bob had opened up a lead of at least five car lengths. I might have been able to stay with him (yes, that's a stretch, but humor me), but after that mistake there was no way for me to catch him. I had to settle for a 5th and a 4th for the weekend.

This was the first weekend that had more than two CFF competitors, and the standings for the TRO Manufacturing Central Division Regional Championship suddenly had a lot more depth than before.