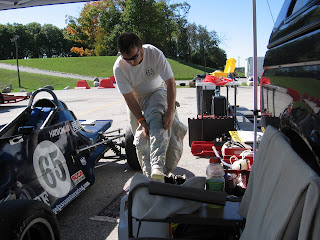 Since the car was already set up for Road America, I decided to run the Midwestern Council races there last weekend. I wouldn’t be able to earn points because I would be running on an SCCA license, but I figured the seat time would be worth it.

I wanted to drop the car off at the track on Friday night, but the forecast suddenly called for strong storms overnight with high winds and hail. I didn’t want to leave the car outside in weather like that, so I left the car in the garage for the night and drove up to register. The weather cooperated and rained on and off while I was there, with a few lightning strikes thrown in for good measure.

The trip to the track was much less interesting than last time (thankfully) and I found a spot on the paved area of the south paddock, very close to where I had parked last month. The only drawback was a stiff breeze which continued until the early afternoon, but spending a few minutes in the sun was enough to get rid of the chill.

The schedule was similar to last month (one morning qualifying session and one afternoon race each day), but my group was later in the day, which made the pace much more relaxing. Because the races are longer than the qualifying sessions, the later groups get more time to prepare for their races. That has always seemed to me to be much more important than being able to leave the track earlier in the day.

My goal for qualifying was to find Pete Wood (or another fast driver) and spend the session following him. That has worked very well for me at Road America, and I’m not exactly sure why. It could be because the draft is so important because of the high speeds on the long straights. It could be that I don’t run the track often enough to have good reference points for braking and turning. Or it could just be that I get a little bored on the long straights and lose concentration, which of course leads to mistakes.

I managed to find Pete a few laps into the session, and as soon as I began following him, my lap times (and his) started falling. Pete eventually got the pole with a 2:44.6, and I qualified right behind him with a 2:44.8. The session felt great, and the day was off to a good start.

The race, on the other hand, didn’t start so well for me. Somehow I lost five positions (two of them in my class) before corner 5. I was now behind Scott Reif in a 1976 Tiga with Scott Durbin in a 1975 Tiga challenging Pete for the lead. I decided to settle in and draft Scott Reif for at least a lap or two, figuring that our cooperation would get us closer to the two lead cars, who I expected to slow each other down a bit in their battle for the lead.

I passed Scott in the Carousel on lap 3 and worked on chasing down Pete and Scott Durbin. I managed to turn a 2:39.5 before I spotted them in the distance. Unfortunately, I got stuck behind another car and couldn’t quite catch them before the checkered flag came out. We finished within 4.2 seconds, and according to the lap times, if I hadn’t been held up by the other car (and IF I could have kept turning 2:39 laps), I could have caught the leaders (or at least I could have been right on their tails). I was happy to settle for third place out of 8 Club Fords. 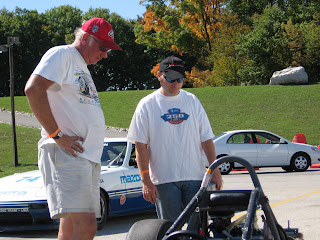 Sunday went much better for me, not so much better for the other Club Ford drivers. I couldn’t hook up with anyone for qualifying, but I still got the pole with a 2:39.4. Pete had pulled in after three laps with his transmission popping out of gear, and Scott Durbin pulled in one lap early. I had out-qualified Scott by 2 seconds, but we later found out that his gearbox had cracked, so his weekend was over.

I couldn’t relax just yet. I suggested that Pete’s gearbox problem sounded a lot like the problem that I had experienced in October of 2005, when my transmission had run itself dry. The heat generated by the dry gears and bearings made the shift detent springs relax, which left nothing holding the car in gear. He checked and found out that he was indeed very low on oil. He refilled the gearbox and test-drove it around the paddock to make sure everything still operated freely. He would be starting 11 spots behind me (make that 10, since Durbin was out). 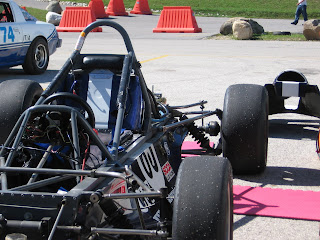 And speaking of gearbox issues… during the first few corners of the pace lap for Saturday’s race and the first few corners of Sunday’s qualifying session, I had missed third gear on a few downshifts and once on an upshift. It seemed to be better when the gearbox warmed up, but I couldn’t explain what was going on. I don’t like when I can’t explain why the car is doing something. Fortunately, I checked the valve lash during lunch on Sunday. Stick with me here, because it will make sense in a minute. To adjust the valve lash, I put the car in gear and push the car to turn the engine over very slowly, one valve at a time. The last step in the process is to put the car back in neutral. When I did that, I noticed the shift lever felt and looked very loose. Closer inspection revealed that one central bolt which holds the entire shift linkage in place had indeed loosened. That allowed just the right amount and type of slop into the linkage that it wouldn’t go into third gear unless I really slammed it home (which, apparently, I do when I’m driving hard). Simply tightening the bolt cured the problem. One more issue off my mind.

Sure enough, Pete passed me on the second lap of the race. I had gotten stuck behind a high-horsepower but ill-handling sports racer, and Pete took full advantage of it. I managed to pass the sports racer on the next lap and caught up to Pete. I decided to stay behind him for a while, since cooperating with him early would get us away from the sports racer and allow us to concentrate on racing each other later. I drafted him for several laps before finally deciding that it was time to make a move.

I tried passing Pete in the Carousel, but the track had become dirty enough that I didn’t have enough traction to pull it off. I tried drafting him between corners 3 and 5, but I didn’t time the move quite right and all I could do was draw even. I didn’t think I could outbrake him into corner 5, so I pulled back in behind him and tried to look for another option.

That same lap, I bobbled a little bit entering corner 14, which could have cost me a lot of time since that corner leads onto a very long front straight. But somehow I managed to salvage the corner and come away with good exit speed. Good enough to draft past Pete into corner 1. Well, almost. I timed the passing maneuver correctly so that the draft helped to “slingshot” me past him, but I could only get about halfway past. His front wheels were still ahead of my rear wheels, and I couldn’t pull away. But I knew that I could brake later and carry more speed through corner 1, so I held my position and waited for what seemed like hours. Finally I spotted his brake marker and heard him get off the throttle. I waited a half a beat later than I normally would have before hitting my brakes, just to avoid tangling or crowding him. I was off the proper line, so I should have slowed down even more than I normally would have, but I dropped one gear (I could hear Pete downshifting twice), got off the brakes, and made it through the corner at full throttle.

Pete wasn’t about to let me go without a fight. He was on my tail entering corner 3, but I managed to carry a bit more speed through that corner as well. He was a few car lengths behind me along the straight leading to corner 5, but I still expected him to try to pass me under braking. I knew I wouldn’t be able to keep him behind me if he tried it. I braked as late as I thought I possibly could, and he didn’t try to pass me. I finally felt like I could breathe again.

He was still on my tail on the hill from 5 to 6, but I gained a little ground coming through corner 7. He was back on my tail entering corner 8 though, but I knew I could get a better lead through the Carousel. The Tiga hooks up so well through that long sweeper that it’s actually hard to follow other cars through there. In fact, I think I passed more cars that weekend by driving around them in the Carousel than on any other corner.

When I set up for the Kink, I checked my mirrors and saw just a small purple spot behind me. I concentrated on building up a lead for a few laps before I couldn’t see Pete any more. Once my mirrors were clear, I relaxed a bit. As I exited corner 5 the next lap I realized what a mistake I had made. I could see the purple nose of Pete’s Crossle just a few car lengths behind me! But it was already the last lap of the race, and corner 7 and the Carousel were in front of us. I told myself I just had to do the rest of the lap correctly and I’d be home free. No banzai craziness or super speed. Just be smooth, don’t over-brake, and drive the correct line. I think I repeated that mantra about two dozen times over the next nine corners. But it got me to the finish line 0.945 second ahead of Pete.

I can’t count all the bruises and sore muscles from the unfamiliar exertion. Honestly I can’t tell where a bruise ends and a sore muscle begins. But even the aches and pains feel awfully good right now.
Posted by John Haydon at 3:14 PM No comments: