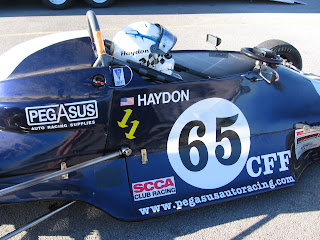 The day got off to a bad start. We were already running late when I realized, about 20 minutes down the road, that I didn’t have my helmet bag in the truck. I had put everything else in the kitchen near the back door, but that bag (with all of my driver’s gear and the car log book) was still sitting in the living room where I had left it after packing it the night before. We turned around and got it (along with the thermos of coffee we had also forgotten, and my electric razor, and a bag which I hoped had my SCCA ID in it) and sped off again, now about an hour behind schedule.

We then discovered that the bag did not have my ID in it. This didn’t help matters, because it meant I would have to take more time (and $8) at registration getting a new photo ID. We finally pulled into Road America at 7:15, 45 minutes later than I had planned (but only 15 minutes later than I had expected when we first left, and 15 minutes earlier than we had feared after leaving the second time).

The first miracle happened at registration. I ran to the registration building, but the registrar had seen me coming and had my file ready before I got to the window. I explained that I couldn’t find my ID, but he said I’d be fine just wearing the event wristband. I was registered and on my way into the track before I knew what had happened. Bless you, bless you. You saved my day.

The next challenge was to find Tech. The entry form said that Tech would be “at the pad,” which I took to mean the concrete alignment pad next to the gas pumps. There was nobody there. I circled around to the Lindstrand Motorsports trailer and asked Nicole where Tech was. She told me they were at the scale pad, which I knew as Impound. Of course! That’s where Tech belongs anyway. I drove off in search of a parking spot.

The East-West Challenge drivers had a reserved paddock area which was about 100 yards or so from Tech. But when I spotted the Tech tent, I realized there were several empty paddock spaces in the paved area right next to it! I pulled into one of those spots, rolled the car off the trailer and into their tent, and spent a relaxing few minutes with a crew of very friendly and helpful tech inspectors.

We rolled the car back to our paddock space and unpacked the truck. I tried to start the car and found that the jumper pack (which I had charged for three days) was nearly dead. I tried the on-board battery and finally got the car started. I shut the engine down after a minute of warming up… and noticed the puddle of oil. Panic! The oil pressure gauge line was loose. One frantic search for the correct size wrench later, and the leak was cured.

I had just enough time to put air in the tires and to put on my (still a little too snug) driver’s suit before qualifying. I squeezed into the car and noticed that the shifter moved very freely, maybe even too freely. It felt like the jam nut (which holds the front half tight to the rear half) had come loose, and only the front half was rotating. Panic again! After Amy verified that the rear half was actually moving, I realized that the new Lindstrand shifter was simply no longer binding and rubbing against everything like the old one had. It was actually working properly, which I wasn’t used to.

I pushed the clutch in to select first gear. The clutch pedal seemed very stiff, but I wrote it off as an atrophied clutch muscle in my leg. I tried again and the pedal went down – and stayed there. Panic again! I frantically stomped on the pedal to try to wake it up, and it popped up after a second or two. That was the only trouble the pedal gave me all day, and I still don’t know what happened. I have to guess that the seals in the release bearing had dried out from sitting, and a few strokes of the pedal lubricated them enough to operate freely.

Qualifying would have been uneventful if I hadn’t spoiled a few laps for a group of FVs. I was locking up the front tires while they were trying to carry momentum through the corners. Then I would try to outrun them by powering down the straights, but I couldn’t get far enough ahead that I wouldn’t spoil their next corner. I finally let them go (or did I finally get in front of them?) and ran a couple of laps alone. My best time was 2:47.4, well off my best time but still good enough for 5th of 6. Not too bad after a two-year absence from that track.

We were about to head to breakfast when a woman stopped me to ask some questions about what I used to race, with whom, and when. It finally dawned on us that she was looking for my father. Her husband, John Daugherty, used to race Formula Vees with my father, and had been trying to track him down for a few years. Their son Michael is now racing Spec Racers, and we had a good time comparing notes and reminiscing.

The nut & bolt check did not turn up any surprises. I changed the break-in oil to synthetic and refueled the car before grabbing a quick bite to eat and changing back into my driver’s suit. Race time came sooner than I had expected. I was once again in a rush to get ready and get to the grid, but I got there in plenty of time.

The pace lap was a sight for sore eyes. I didn’t realize how much I missed being in a string of formula cars darting from side to side, warming up tires. The qualifying order was Crossle, Crossle, Tiga, Tiga, Tiga (me), Tiga! The pace car slowed us to a crawl up the front straight hill (3000RPM in first gear), but we got a green flag and a clean start.

A newer Formula Ford which had started at the back pulled out to pass me going into corner 1, and I gave him the corner. I was still unsure of my brake bias, and the pass wasn’t for position, so I had no interest in challenging. I tried to settle in and stay on the tail of Marty Handberg’s red Tiga. The next lap, he pulled out to pass Joe Marcinski’s silver Tiga, and I stayed with him. That took me to 4th place, but I couldn’t challenge for third. I kept up with the pack and cut 6 seconds off my qualifying time. It felt great to be one of a half-dozen Formula Fords running nose-to-tail for so long.

I was only able to keep up for a few more laps before I realized how sloppy my driving was becoming. I was mentally exhausted, physically spent, and still using too much energy worrying about the car. I backed off a bit, but it didn’t take much before the pack was out of sight. The next few laps were mostly uneventful as I tried (with increasing difficulty and decreasing success) to put a good lap together. I finally finished sixth, but the car was still in one piece, and I had a finish.

I realized last night that the tires I was using were the same tires that were pretty much used up at the end of 2005. Suddenly I feel a lot better about not being able to keep up with the pack.
Posted by John Haydon at 2:25 PM No comments:

Sorry to spring this on everyone after such a lengthy delay, but there has actually been some progress on the car!
The engine was actively being built (yes, by me) starting around June-ish. The big delay was due to doubts about the oil pump and how to solve a major clearance issue between the pump and the gearshift linkage. Short story long, the most common Formula Ford oil pump basically would not allow the use of the Tiga shift linkage. The second- and third-most common oil pumps also wouldn't fit the chassis because of clearance issues, but these issues were much more serious (think motor mount and oil tank clearance). With a bunch of help from (who else) Bruce at Lindstrand Motorsports, the shifter has now been modified to clear the most common oil pump. A new oil pump has been fitted, the engine has been assembled and installed in the car, and we tried to start it this weekend.
And we tried. And we tried. And we tried.
First, the easy part. I have now built literally more engines than I can remember. I am always very careful to install the distributor with the rotor pointing at the #1 post with the #1 cylinder at Top Dead Center. But I have never once managed to line it up at TDC on the compression stroke. I always manage to end up with it lined up at TDC on the exhaust stroke. This time was no exception. Fortunately, I will never forget what Pete Wood told me when we put the car together in preparation for him selling me the car: "My mama told me that when it 'pops' through the carburetor, you're 180 degrees off." And that's exactly what it did -- after a while. After the starter battery had worn down to the point that it was cranking the engine noticeably slower than it had that morning. 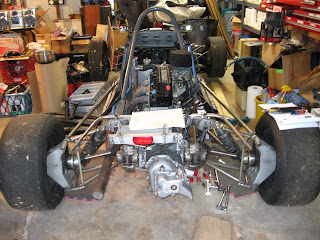