Results, I've Had a Few

The first race weekend at Blackhawk in April was a two-day drivers' school followed by a Regional race on Sunday. Only one other CFF showed, and he qualified two spots behind me. I think he got caught up in traffic on the start because I didn't see him for most of the race. But around the halfway point, just when I was starting to curse myself for never actually getting around to exercising like I had planned, I noticed a distant speck in my mirror. The speck was getting closer, gaining a little on me every lap. After a few more laps I could see that it was a red car like the other CFF. I tried to calculate how many laps he would need to overtake me, and if there was any way I could hold him off long enough. At the start of the last lap, it was clear that it would be a close finish. I tried to put the other car out of my mind so I could concentrate on driving as well as I possibly could. Finally, coming into the last corner, he was close enough that I could see the car more clearly. It was not the other CFF, but Jeff Primm, a student of mine driving an FF. I had been coaching him throughout the day, and he was doing a great job of putting my advice into practice! We drag-raced to the finish, and he got me by a quarter of a second. The other CFF finished about 16 seconds behind me. But once again, the big story was Bruce Lindstrand. He test-drove a customer's 1998 Van Diemen FF, starting at the back of the pack after the green flag, and worked his way up to second overall, winning FF and lapping everyone up to 4th place.

On Memorial Day weekend, we went to Grattan for a double Regional. This weekend was the first two rounds of the 2008 East-West FF/CFF Challenge, but turnout was surprisingly light. Four FFs and 7 CFFs entered. I blame the long drive for my 5th place (8th overall) finish on Saturday. This weekend also had a little twist. Usually the race grid is determined by the fastest lap time turned during qualifying, but this time the Sunday morning qualifying session was a 7-lap sprint race, and the finishing order would determine the grid for the race. I managed to get a great start, passing two CFFs and lining up behind Bruce Lindstrand in the LMI Tiga (the car had stickier tires than are allowed in CFF, so he ran in FF). Steve Beeler in a Lola and Joe Marcinski in another Tiga were right behind me for a couple of laps, but when I failed to capitalize on a (rare) misstep by Lindstrand, Beeler took advantage of my error and passed us both. Lindstrand passed him back before Marcinski passed both me and Beeler for third. I finished 5th again, but that sprint was so much fun I didn't care. I was also testing a new video camera that weekend, and fortunately the one session I managed to make it work was the qualifying sprint.

The race was a bit weird. Beeler shot up the middle at the start and ran away with the two leaders. I tried to keep up with Marcinski but I couldn't keep up the pace and finally let him go. When I realized I had nobody to chase or to defend against, I slowed a little bit and just waited for the last lap. Suddenly, the last corner on the last lap was showing a waving yellow flag. I lifted off the throttle slightly in case I had to stop or avoid a spinning car, but when I crested the hill I saw Beeler coasting, out of gas. I put my foot down and passed him for 4th. In impound, I learned that Dave Harmison's Royale had overheated and dropped out after 3 laps, which would have given me 3rd place. But the results sheet showed Beeler in 3rd and me in 4th. I couldn't understand it. I had passed Beeler well before the flag stand, so why did the results show that he had crossed the finish line a full second before I had? Cindy Lindstrand investigated and was reminded that at Grattan, the finish line is actually about 100 yards before the starter's stand. Beeler had crossed the line before me. I only beat him to the starter's stand.

One quick turnaround later, and it was time for a double Regional at Road America. We had a fair group, with 23 cars total, but again only 2 CFFs. Alan Murray was having a hard time getting back in the groove in his Crossle, and he started the weekend in bad shape: registration mishaps, a late start (he got to the track just as we were about to start the qualifying session), and a misfire above 4000 rpm -- and that was all before lunch on Saturday, so he would start the race at the back of the grid. Saturday's qualifying session was tough. The track was wet in some places and dry in others. You could come full-bore up the front straight, through 1 and 3, then full-bore down the back straight, but the braking zone for corner 5 was wet. Tiptoe through 5, and you could blast up the hill for 6, full throttle through 7, plenty of traction in 8 and through the carousel -- but the track was wet from the Kink through corner 12. That's a very fast section, so losing traction there was a scary prospect. I managed to turn a 2:47, which was fast enough to grid 10th overall. 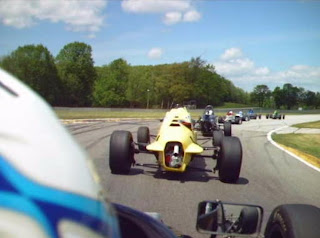 I spent most of the race trying to chase down Bill Bonow in an FST and Dan Johnson in an FF as they traded 7th place back and forth for several laps. Suddenly Johnson slowed, and as I passed him I could hear that his engine didn't sound right. Neither did mine, though. It sounded like a diesel truck was tailgating me, which either meant horribly misadjusted valves or a blown exhaust header gasket. I concentrated on chasing down Bonow, whittling down the gap until he also slowed and let me pass, which gave me 7th overall. Sunday's qualifying started off poorly. Murray was ahead of me, but we were stuck in a pack of cars for a few laps. Once traffic cleared, I passed Murray on the front straight and he followed me as I passed a F500 coming into corner 1. He stuck with me through corner 3 and fell back a bit coming into 5. I didn't see him again through the carousel, but I just assumed I had lost him (the Tiga is amazingly stable and quick through the carousel). The next lap, corner 4 was waving yellow. As I crested the hill, I could see two wreckers at the side of the track near the braking zone for 5... pulling Murray's Crossle off the wall. Fortunately, it looked a lot worse than it was. The car had a bent tie rod and four flat-spotted tires, but no other damage, and Alan was unhurt. He told me later he had just jumped on the brakes a little too hard, locking the wheels. Before he had a chance to react, the car was backwards in the wall. I gridded 12th for the race and spent the first few laps playing with Carl Middelegge in an FST. He would draft me on the straights (using my horsepower for a tow) and I would let him pass before the corner, because I knew he could corner much faster than I could. We repeated that trick until he had a solid lead over Bonow in the other FST, when he let me go. I tried to chase down Dan Johnson again, but his car was running much better than it had on Saturday. I cruised to a 6th overall and another win. While Carl and I were playing and trying to chase down the faster cars, I managed to beat my qualifying time by almost 3 seconds (2:39.9), getting me to within 2 seconds of my best time ever. And that's only 7 seconds off the track record. I think I can make that up just in the braking zone for corner 5.

Next stop: Blackhawk, July 12 & 13 for the "Firecracker" double Regional (rounds 3 & 4 of the East-West Challenge series)
Posted by John Haydon at 1:35 PM No comments: